The subsequent law of the widow spouse

The subsequent law of the widow spouse

In this blog of Mercury Lawyers in Marbella we will focus on subsequent law of the widow spouse.

First of all, we must mention who does not consider as a spouse:

The spouse legally or “de facto” separated. But if reconciliation between the separated spouses had been notified to the Court that knew of the separation or to the Public Notary that granted the public deed of separation, the survivor will retain their rights.

The marriage declared null, except if the nullity is subsequent to the death and the survivor had acted in good faith.

The rank in the succession of the spouse

Regarding the rank in the succession of the spouse, the Spanish Civil Code establishes an order of who are the forced heirs. In this way, in the first place, children and descendants inherit from their parents and ancestors. Secondly, in the absence of the above, parents and ancestors regarding their children and descendants. And thirdly, in the absence of all of the above, the widower or widow will be the sole heir.

Instead of usufruct, there is also the option of the heirs to satisfy the spouse with his/her share of usufruct, assigning him or her an annuity, the products of certain assets, or a capital in cash. When the widowed spouse attends only with children of the deceased, he/she may demand that his/her right of usufruct be satisfied, at the choice of the children, assigning a money capital or a lot of hereditary assets.

It is important to point out that the wills granted before the divorce, separation or the declaration of nullity, are not automatically extinguished, since the will of the testator will always prevail. Therefore, from Mercury Lawyers in Marbella we recommend granting a new will.

Do not hesitate to contact our Law Firm in Marbella if you have any questions about the subsequent law of the widow spouse or the inheritance tax for non-residents in Spain. Also to advise you on any other civil matter. Our experienced civil law barrister will be happy to assist you. 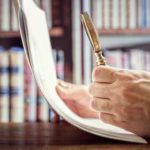 The criminal procedure called in Spain » The defense report

The marriage economic regimes in Spain (part I)